Will require state agencies to be more transparent, accountable

HARRISBURG – The Senate of Pennsylvania approved legislation authored by Senator Kristin Phillips-Hill (R-York) that would require state agencies to publicly post all permits issued, as well as create a mechanism to monitor the progress of permit applications working through the bureaucracy.

“The pandemic shined a bright light on the inadequacies of the status quo,” Phillips-Hill said. “We continue to see major investments leave this state due to how slow, inconsistent and ineffective our permitting review process is. The status quo benefits bureaucrats and punishes job creators and Pennsylvania taxpayers. This legislation fixes that and makes state government more accountable.”

According to the Associated Press, project permits for the U.S. Steel plant in western Pennsylvania never came through and the company opted to add capacity outside of the Commonwealth. The company initially planned to upgrade its Pennsylvania-based facility with a $1.5 billion investment.

Senate Bill 28 would require all state agencies that issue permits to increase transparency by requiring agencies to post information about the permits that they grant on their publicly accessible website. State agencies would also be required to create an accessible tracking system for applicants to check the status of their applications and to clearly state the legal authority that the agency relies on when rejecting a permit application.

The tracking system shall include processing time, dates of each permit, completeness review, technical review, elevated review, and an estimated time remaining for each incomplete phase of the permit approval process, as well as a contact person assigned to answer questions about the application process.

Phillips-Hill’s legislation would also require state agencies to contract with third-party professional entities if a permit is subject to a decision delay.

Under the bill, state agencies would have to submit an annual report to the General Assembly documenting how many applications it reviewed, the average timeframe for permit decisions, number of applications reviewed by third-party reviewers, and the number of employees who reviewed the permit applications in each regional office. 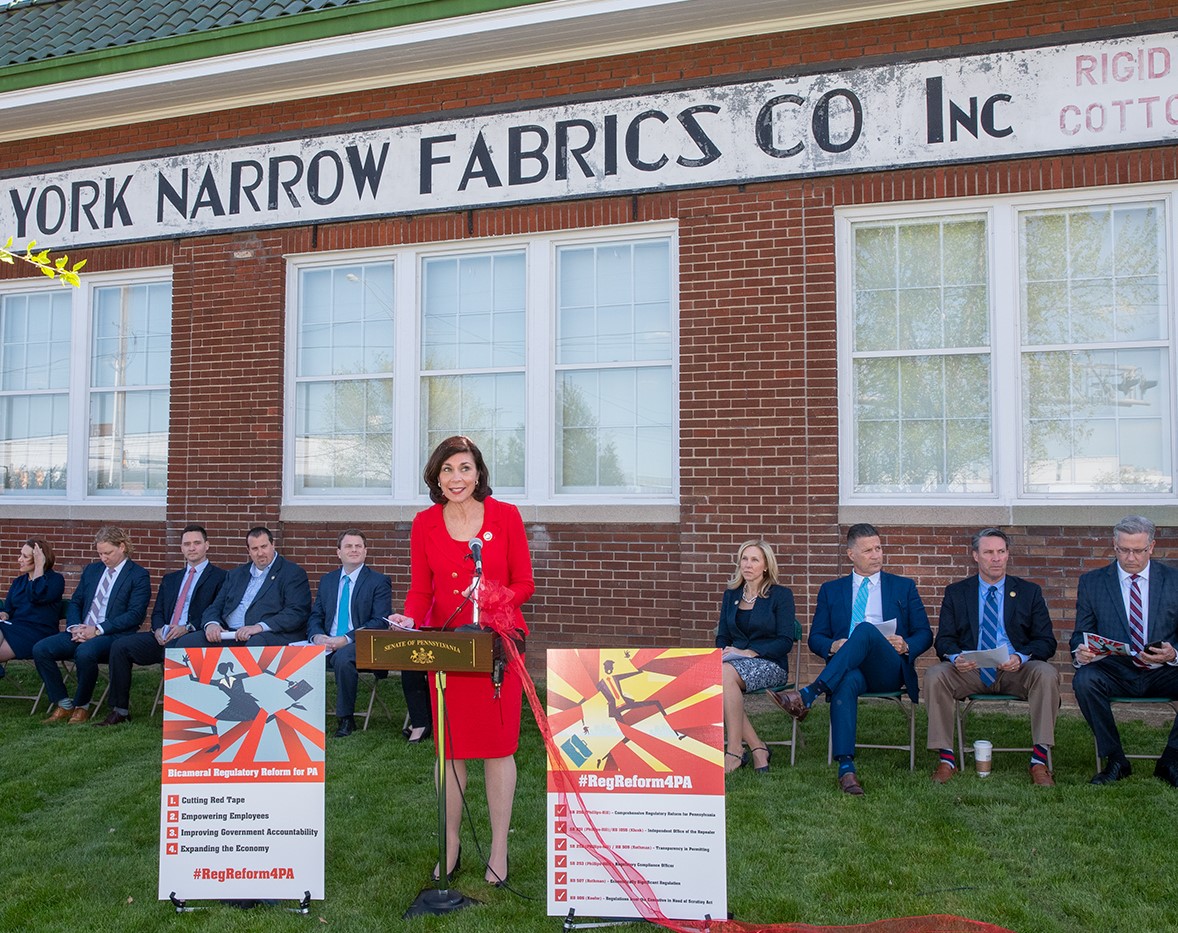 PHOTO CAPTION: Senator Kristin Phillips-Hill (R-York) speaks at a news conference in front of the former site of York Narrow Fabrics Company in York. The facility used to manufacture the tape required to bundle federal regulations, which was eventually called “red tape.” Local lawmakers held a news conference at the site in 2019 to unveil their plan to address regulatory reform and cut “red tape.”

“Permitting delays have cost the state significant investment. By cutting down on permitting delays and bureaucratic red tape, we can avoid significant costly subsidies footed by taxpayers, and, more importantly, we can compete for jobs once again to grow our economy and provide opportunities for the next generation,” she added.

The legislation heads to the House of Representatives for its consideration.