HARRISBURG – The Senate Communications and Technology Committee wrapped up its series of public hearings regarding the lack of broadband in rural Pennsylvania today with testimony that reinforces the fact that most of the state suffers due to a lack of access to high-speed broadband.

“We have a growing divide. As more industries seek to gain access to high-speed internet, we are falling further and further behind,” said Senator Kristin Phillips-Hill (R-York), who leads the committee. “I am incredibly grateful for the testimony from all stakeholders over the last month on this issue as we map out a strategy to systematically address the problem.”

Monday’s hearing at the state Capitol featured testimony from Secretary Curt Topper, who leads the Department of General Services.

Phillips-Hill requested more information from Topper on a recently signed 30-year contract the department entered into that provides for the sale of state-owned assets for the deployment of broadband. Phillips-Hill expressed concerns that the agreement was modified to take the focus off assisting unserved and underserved communities, and is now solely focused on providing revenue for the state.

Topper indicated that his department received three bids and the contract provides incentives for the contractor, Agile, to lease state assets, which will return to the state’s General Fund.

Phillips-Hill relayed her concerns over the department entering into such a lengthy contract and requested more information on the issue to ensure all laws were followed in the contract. She also said it should not distract from bicameral and bipartisan efforts to inventory all state-owned assets to deploy high-speed broadband in unserved and underserved areas throughout the Commonwealth.

Also testifying was Sascha Meinrath, who has studied the issue extensively through his work at Penn State University. Meinrath is also a nationally known expert on the issue. He looked at how Pennsylvania has, in the past, tried to deploy high-speed internet access by providing tax incentives and funding for various telecommunications carriers. He said Verizon received significant subsidies and the ability to charge customers more to deploy broadband over 25 years ago.

“While it is difficult to determine just how much money Pennsylvania residents have already paid for this roll-out, the consumer watchdog group, Teletruth, has conducted a number of in-depth investigations looking at Verizon’s SEC filings, tax documents, and other records and what they’ve found is fairly astounding,” he said.

Meinrath went on to question how much the state has already spent on the rollout and how the state has not realized the result initially anticipated.

Kathryn de Wit of Pew Charitable Trusts, a Washington DC-based think-tank, testified about the national implications of the issue.

“Although there is no one-size-fits-all solution to improving coverage to ensure that all Americans have access to broadband, all efforts can benefit from more research and data-driven policy discussions,” she said.

Pew also looked at states that have made deploying high-speed broadband to more residents a priority and found five key characteristics. Those states have established task forces, defined key terms (e.g., broadband, unserved and underserved), implemented funding and incentives, developed new policies for infrastructure access and clarified entities that can and cannot provide broadband. de Wit testified that states are creating a framework have been largely more successful than states that did not.

“With a robust network of stakeholders and buy-in from all levels of government, a state broadband deployment plan will likely be more successful,” de Wit noted.

Representing the state’s senior citizen population, AARP submitted testimony in support of legislation sponsored by Phillips-Hill and Representative Pam Snyder (D-Greene/Fayette/Washington) that would require an inventory of state-owned assets for the deployment of broadband access in underserved and unserved areas throughout the commonwealth.

“We believe Senate Bill 470 and House Bill 305 offer a path to improving access to this critical need, and we look forward to the State Government Committee considering this legislation,” the testimony read.

Phillips-Hill, who will also serve as acting chair of the Senate State Government Committee, is holding a committee meeting on Tuesday to consider those two proposals.

“We must take the right bipartisan approach to this and it’s clear that throwing money at an undefined problem is not the best way to move forward,” Phillips-Hill added. “We have provisions in place to help us measure the problem that will allow us to map out a strategy moving forward. We can learn a lot from other states in how we can do this the right way, and we can look at mistakes in our state government in how we can do this the wrong way. I prefer the former; not the latter.”

Also testifying at Monday’s hearing included the Mercatus Center, Comcast, SEDA Council of Governments and the Fund for the Northern Tier.

You can learn more about the public hearing, view the agenda and read testimony at communications.pasenategop.com. 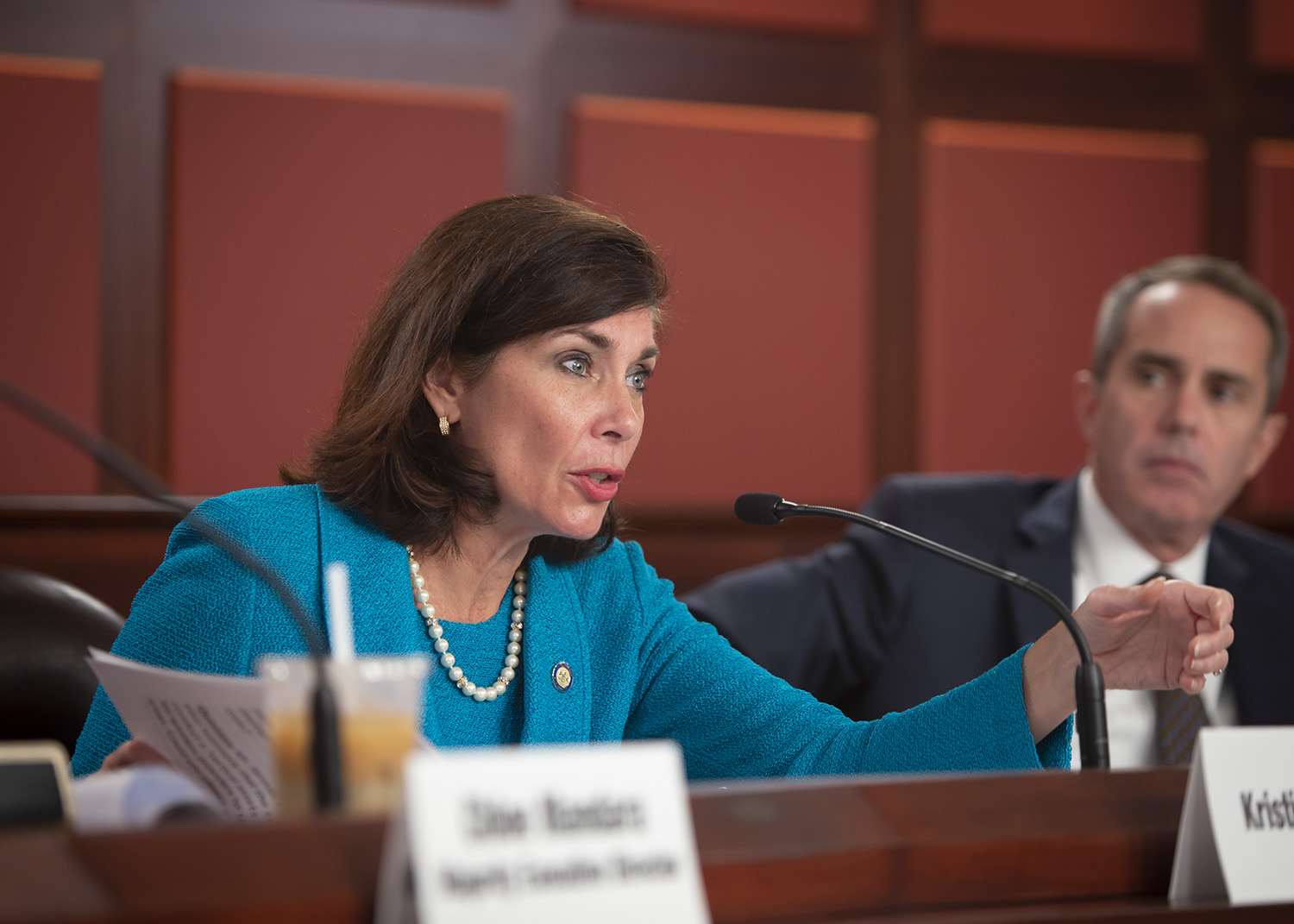 Senator Kristin Phillips-Hill (R-York) chairs a Senate Communications and Technology Committee public hearing at the state Capitol on Monday. The hearing marks the conclusion of a series of public hearings the committee held across the state on how to improve access high-speed internet in underserved and unserved areas.